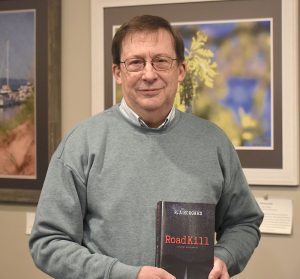 As Reed investigates the death, he begins to doubt the guilt of the accused who is on trial. His investigation leads to dangerous criminals who have infiltrated the Anchorage area.

Norgard pictures Anchorage as an interesting place to live and perhaps he will tell us more about that city during his talk at TAG.  He knows of what he writes, having lived in Alaska for around 20 years as an Army investigator and pursued more investigative work after he retired.

His experiences also allow him to enlighten readers on the interesting procedures for bringing court charges against an accused individual.

Snowplows play a prominent role in this book — rather timely for me as I was reading the book at the same time a snowplow on Rt. 250 near Milan went out of control.

The snowplow threw snow and ice over the center barrier and disabled more than 40 cars and trucks cars on the opposite side of the Ohio Turnpike.

The method criminals used to destroy snowplow evidence was a surprise to me.

Readers of Norgard’s first Sidney Reed mystery, “Trophy Kill,” will remember that Sidney has been trying to find the truth about the violent death of his beloved wife Molly.  Molly’s death continues to haunt Sidney, even as he looks for a new woman in his life.

Does Sidney learn the cause of her death or will the third book in this series solve the mystery of Molly? I can hardly wait to find out.

Peggy Debien is Curator of the Ottawa County Museum, an avid reader, and her excellent book reviews in The Beacon have covered a wide range of topics.