The Great Swami predictions for 2030

The Great Swami (otherwise known as your slightly cynical Beacon Newspaper Publisher) predicts what Ottawa County will look like in the year 2030. And remember, we’re just having a little fun, ok?

January 2030 – Ivanka Trump, entering her second year in office, announces that the unemployment rate has reached an all time low of 1.6%. She also notes that another attempt by China to transport a new virus was thwarted by special operations forces and Delta Force operatives. She added that they were all wearing face masks.

February 2030 – Led by veteran quarterback, Baker Mayfield, the Cleveland Browns win their fifth straight Super Bowl LXV. Ohio Governor Theresa Gaverone announces that Gypsum’s growth in the last 10 years has been so strong, it can now be designated as a city with over 6,000 residents. She appoints Tina Britt as Gypsum’s new Mayor.

March 2030 – Oak Harbor Mayor Mike Shadoan announces that the new 250-slip transient marina along the shore of the Portage River near downtown will be completed by April 1. He adds that all summer weekends starting in May are already filled. The Oak Harbor High School wrestling team edges St. Paris Graham for the Division 2 State Championship.

April 2030 – Once again, the spawning season near Niagara Reef has spawned enormous numbers of walleye anglers. All the local hotels and restaurants are filled with fishermen. Due to the amazing hatch of 2018, just about every visiting fisherman goes home with at least one 10-pounder.

Ottawa County Commissioners Joe Helle, Mike Snider and Rose Lucas Haninger cut the ribbon to open the festival. Meanwhile, the docks on the Portage River in Oak Harbor are once again filled to capacity over the Memorial Day weekend.

June 2030 – Ten people attend the annual City Officials vs. News Media softball game at Waterworks Park. Mayor Stine socks a walk off home run to win it for the City. Dave and Busters opens up a new restaurant inside the Island House. It is the 18th attempt by a food service vendor to “give it a try” at the facility that was formerly known as Port Clinton’s cornerstone landmark.

July 2030 – The transient docks of Oak Harbor are stirring economic development in the Village. Riverfront property is being bought up by developers from across Ohio and the country with the idea of creating riverfront condominiums. “Christmas at the Bay” draws law enforcement officers from all over Northern Ohio, as the weekend comes off incident free.

August 2030 – Kelley Clarkson is the featured entertainer at the massive Put-in-Bay Music Festival at the Airport. The event draws over 100,000 people. Lakeside enjoys its finest season ever. Hoover Auditorium is filled for virtually every act there. At this moment, there are no homes available for sale inside the gates. Chip Schaffner, with Chip Bodie on board, takes 1st overall at the 135th Annual Bay Week Regatta at Put-in-Bay.

September 2030 – It’s the 11th Anniversary for “Rock the Light” in Waterworks Park. Greenday and Bare-Naked Ladies provide the entertainment. The Ottawa County Historic Museum moves into the facility that was the old City Hall on Second Street in Port Clinton. The old City Hall had to be torn down and rebuilt as the museum. The only remaining artifacts of the old building are the basement jail cells. Thomas McRitchie wins the 2029 Green Island Race, finishing just ahead of Ramon Eickert.

October 2029 – Ageless Trevor Bauer throws a perfect game for the LA Dodgers in the 2029 World Series won by the Cleveland Rockers in six games. Meanwhile, it is officially Carl Koebel Season on Facebook ahead of local elections. Oak Harbor edges Port Clinton 14-13 in the season finale. Both teams qualify for the state football tournament.

November 2030 – The resurgent Davis-Besse Nuclear Power Plant announces another planned shutdown for the winter to refuel. Since the oil crisis of 2022, nuclear energy creation has become an important driver of electricity and power. Cooper Tire and Rubber announces plans to build a brand new facility at the old Standard Products location on Port Clinton’s east side.

December 2030 – Santa Claus arrives simultaneously in Oak Harbor, Marblehead and Port Clinton. Since 2020, there has been a huge resurgence and revitalization of downtown Port Clinton. Many of the older buildings had to be torn down, like the old City Hall and IOOF. But there appears to be close to 100% occupancy starting in April of 2030.

There is a strong possibility that NONE of these things will ever happen, but it’s just fun to speculate anyway. If anybody out there is offended, sorry!!! 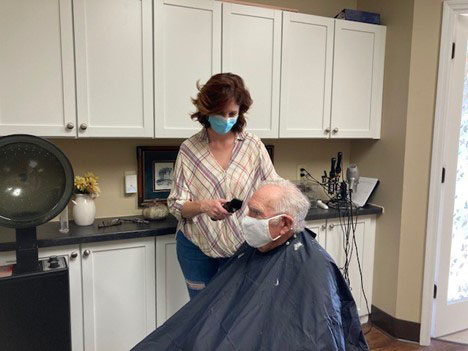 Otterbein Senior Life resident Bob Below enjoys some relaxation time and a haircut at the Otterbein salon.