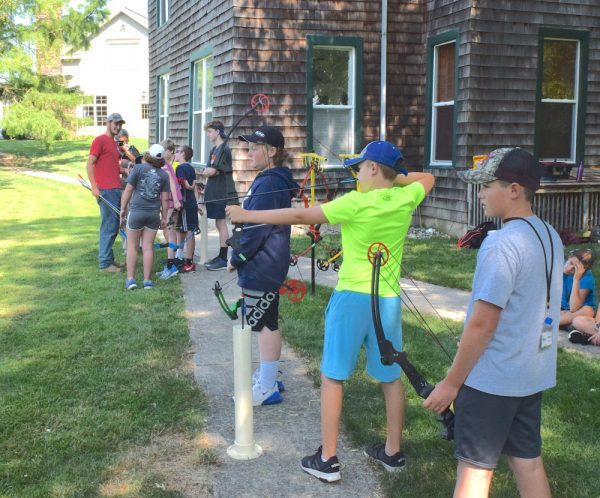 Youngsters line up to receive instruction on shooting a bow-and-arrow, and try to hit life-like targets on the archery range set up on the banks of Sandusky Bay.

There’s a lot of “wild” to be found in the pristine marshland at the Winous Point Hunt Club on Sandusky Bay. Thanks to club officials, the Ottawa County Soil and Water Conservation District (SWCD) and a raft of other county parks and conservation groups, area school kids had the recent chance to experience the unique environment during the SWCD’s annual “A Day on the Wild Side.” 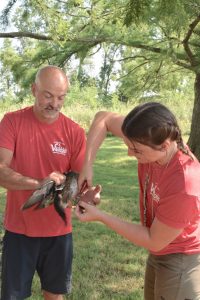 Legendary bird bander Tom Barlett and his crew captured a variety of songbirds to be banded on the “A Day on the Wild Side.” Executive Director John Simpson of the Winous Point Marsh Conservancy holds a drake wood duck as summer intern Rachel Bealer bands the bird.

Sixty boys and girls in the fifth through the eight grades from area schools signed up to experience the outdoor heritage of Ottawa County through a wide range of activities. The youngsters took boat tours around the pristine marshland in authentic “punt” boats used for waterfowl hunting, observing deer, ducks, geese and swans.

They all safely plinked away with a variety of small caliber firearms and bows-and-arrows. At one station manned by the Black Swamp Bird Observatory and Winous Point officials, they released dozens of birds that had been captured and banded by expert Tom Barrett and his crew.

The young visitors had the opportunity to gently release the songbirds and, on this day, waterfowl. A bevy of wood ducks were trapped, banded and released

There was also time to learn new fishing skills, making a few casts in a bid to catch a fish or two before the pizza arrived for a group lunch.

“While many of the kids have fished and hunted, for some it was the rare chance to shoot targets with .22 rifles under close supervision, after drills to learn the required safety rules,” said Kelly Shott of the Ohio Division of Wildlife. Fellow wildlife officers Jim Brown and Jim Schott manned the .22 rifle range, and there were lots of smiles when the boys and girls punched holes in the paper targets.

The most dramatic shot was a safety issue. Watermelons were blasted with shotguns by the instructors, displaying the damage a single shotshell can inflict if someone is hit with a load of pellets.

Winous Point has been a hotbed of marshland and waterfowl research, working hand in glove with state and federal agencies. As a result, Winous Point continues to slowly grow in size and scope, and marshland habitat projects abound in the Sandusky Bay region and Northwest Ohio, a massive wetlands once known as The Black Swamp that dominated the region centuries ago.